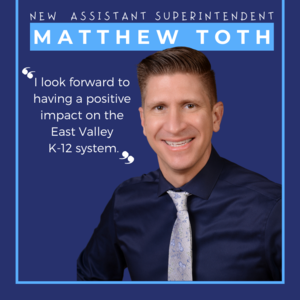 It is with great pleasure that we share that, at yesterday’s school board of directors’ meeting, the board approved the appointment of Matthew Toth, on recommendation by Mr. Hill and Mr. Schieche, as the new assistant superintendent of the East Valley School District. Mr. Toth will transition from his current role as the principal of East Valley Central Middle School to this new position on July 1, 2021. The East Valley Board of Directors made the decision to approve the appointment of Mr. Toth, noting the exemplary leadership he has demonstrated throughout his career in East Valley and his ability to forge positive connections with students, staff and the community.

Mr. Toth began his career in education at Zillah High School as a math teacher. He then joined us in East Valley in 2012 as the assistant principal of East Valley High School. After having success in his role at EVHS, Mr. Toth was the clear and top choice during the search for a new principal at East Valley Central in 2014. When Mr. Toth began his tenure as the principal of E.V.C., the school was ranked in the bottom 5% of all Washington State schools. Through his strong leadership, commitment to serving all students and staff, and his unwavering positivity, he has been able to lead East Valley Central to a position where they have been recognized at the state level multiple times for student growth, as well as by the Gates Foundation for outstanding student growth.

Matthew Toth looks forward to the opportunity to collaborate with staff throughout the district to continue to find innovative ways to support students. He is excited for this next step in his career stating, “Hands down, from the students, staff and supportive parents to the people I’ve worked with in the community, I truly feel like there is no place like East Valley. I look forward to having a positive impact on the East Valley K-12 system.”

We ask that you join us in congratulating Mr. Matthew Toth!