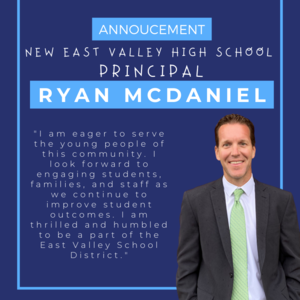 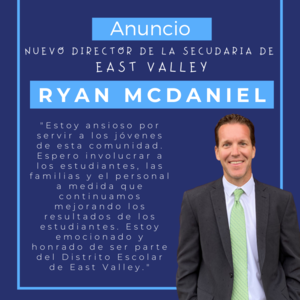 The East Valley School District is proud to announce that Ryan McDaniel will become the next Principal of East Valley High School, effective July 1, 2021.
Mr. McDaniel has over 22 years of experience in public education, serving in the role of math teacher, assistant principal, and principal. He began his teaching career in the (click on title to read more).

Palm Springs Unified School District before moving to Central California to become a math teacher and head basketball coach at Lemoore High School. Wanting to be closer to family, Mr. McDaniel moved to Yakima in 2005. In 2007, Mr. McDaniel became a school administrator and has operated in that capacity for the past 14 years.

For the past eight years, Mr. McDaniel has served as Principal of A.C. Davis High School in Yakima. During his tenure, the school realized many positive student outcomes. Most noteworthy include higher graduation rates, increased access to the International Baccalaureate (IB) program, the implementation of a school-based health clinic, inclusionary practices for special needs students, and state recognition for closing gaps and demonstrating improvement among student groups.

Mr. McDaniel completed his Bachelor of Arts degree from Central Washington University, majoring in Secondary Mathematics Education. He earned his Master’s degree from Chapman University, Principal Professional Certification from City University, and Superintendent’s Credentials from the University of Texas at Arlington.

Mr. McDaniel and his wife Darcy live in the Yakima area, raising four sons ages 8, 10, 11, and 17. The McDaniel family spends a tremendous amount of time traveling around the Pacific Northwest participating in youth baseball. Mr. McDaniel is quick to point out that while four active boys keep him busy, Darcy is the family’s foundation who ensures everyone is organized and well taken care of.

Mr. McDaniel says, “I am eager to serve the young people of this community. I look forward to engaging students, families, and staff as we continue to improve student outcomes. I am thrilled and humbled to be a part of the East Valley School District.”